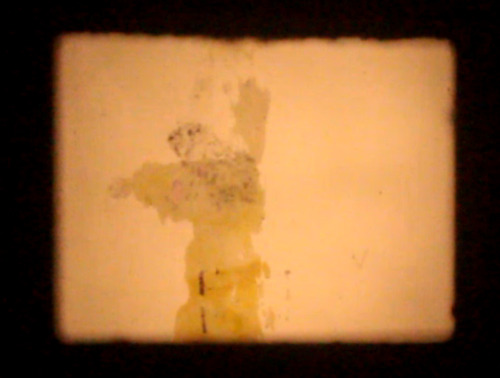 Stolen is a 16mm film from which the image has been almost entirely stripped from its celluloid base. The film, liberated from the Karnataka Documentary Film Archive, is a documentary of Kannada freedom fighter and educator H. Narasimhiah, who now appears as a ghost in the document of his own history. The resulting work is emblematic of the vast archives of material history which have failed to make the transition to digital formats.

Nihaal Faizal (born. 1994) is an artist living in Bangalore, India. His work examines our relationship to existing technological documents and their histories. Appropriating material from both private and public sources he has previously worked with computer desktop backgrounds, user-level software, surveillance footage, family photographs, commercial cinema, TV shows and stolen 16mm prints. Nihaal has also been involved in the organisation of various exhibition projects. These include G.159 (2013 – 2016), a project space he ran in his student apartment in Bangalore and an exhibition of the photographic work of his great grandmother, Haleema Hashim.